Often, there is need for the same functionality in different projects, whether it is with custom classes, enums or even extensions on framework classes. In order to not reinvent the wheel over and over again for your future self, why not create a personal toolbox that can be imported in all projects?

This post will concentrate on Swift Package Manager (SPM), since this is the first party solution from Apple, which they baked in to iOS and Xcode in 2019. Be aware that there are other Package Managers like [CocoaPod][1] and [Carthage][2] that filled that void prior to that. They were and continue to be great tools as well. 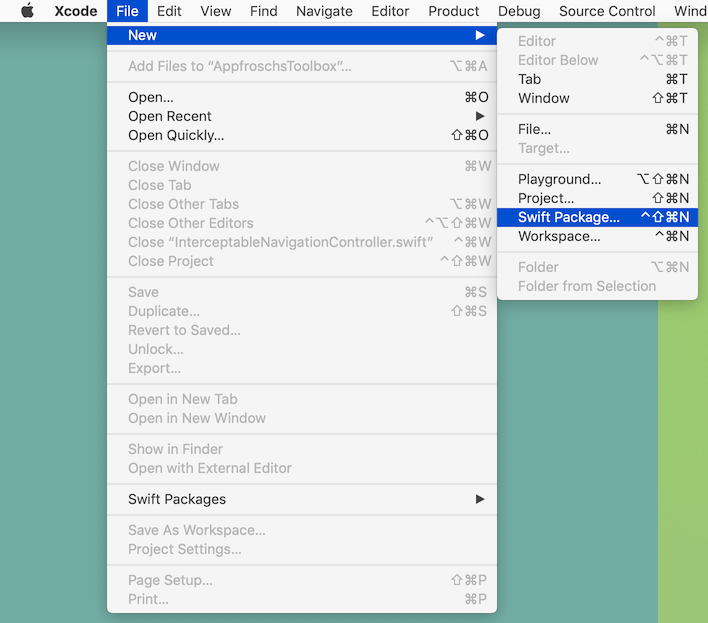 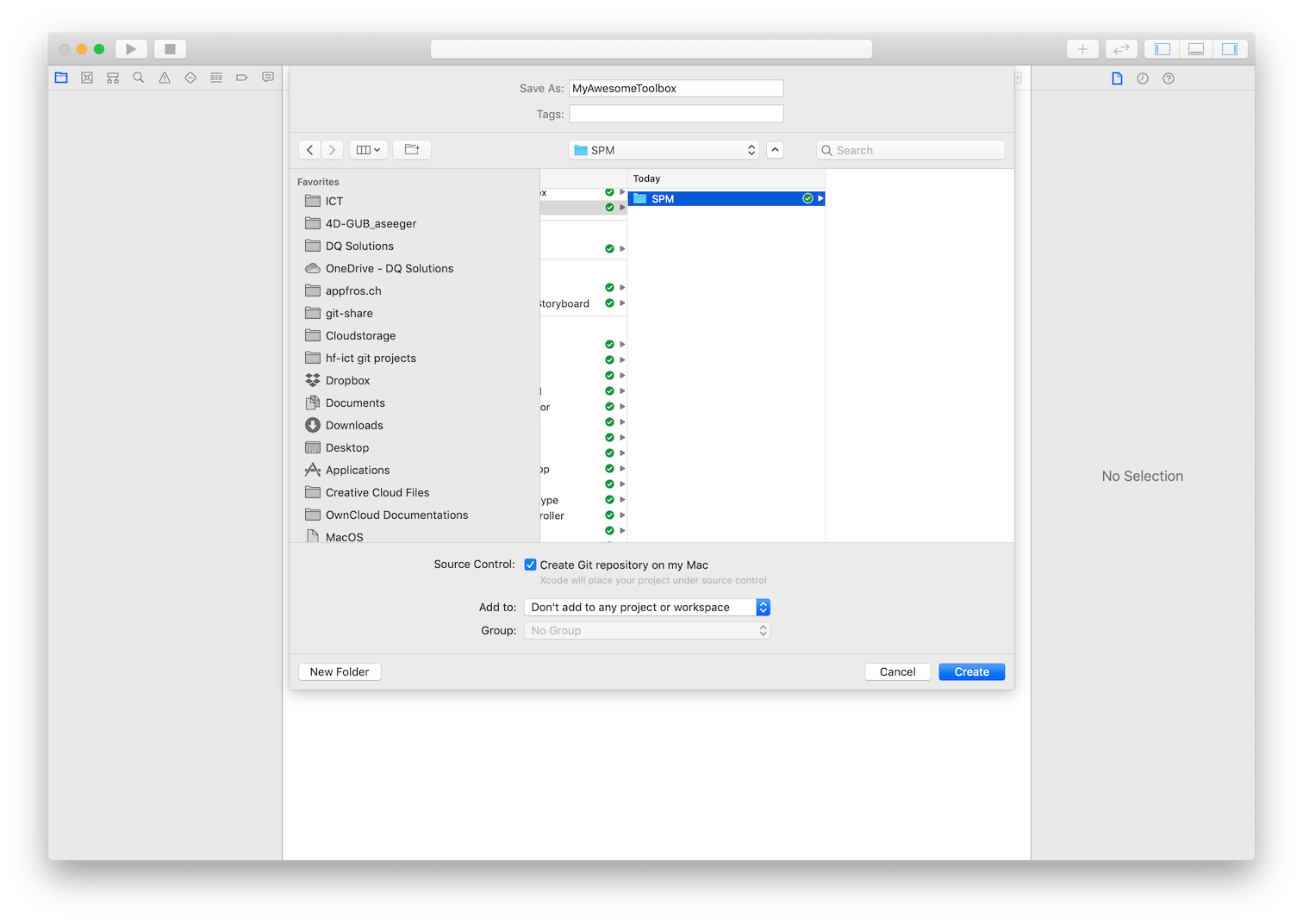 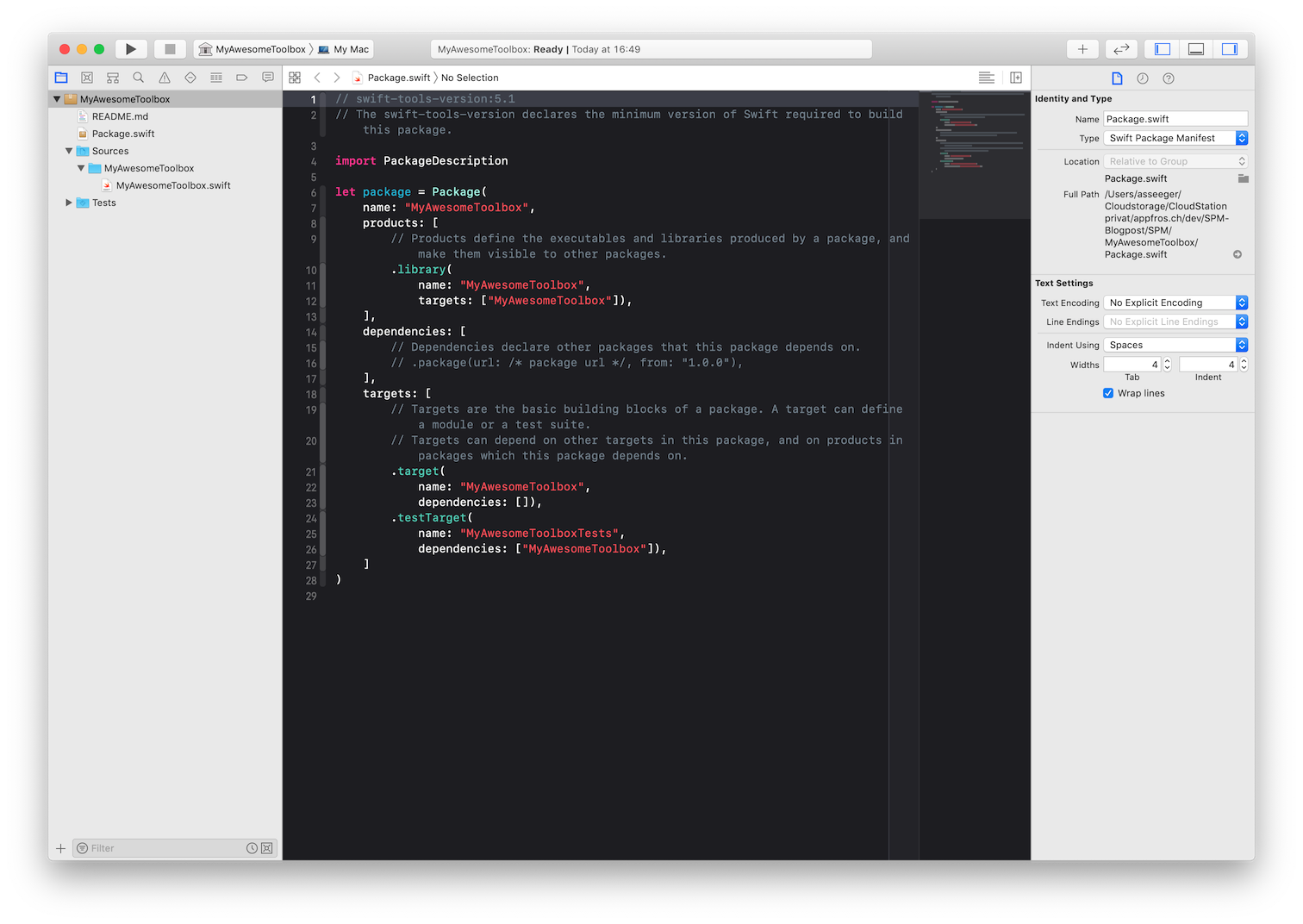 Adding The First Custom Class To The Toolbox

Something I want to add quite early to all of my projects is a wrapper to do decent logging. Because this is a pretty simple wrapper, I want to take this as the example for this post.

To add a new class, simply choose File>New>File or use the shortcut Cmd+N. Rename the newly created file to <DesiredName>.swift, where the important part (obviously) is .swift. Then, make sure to relocate this file to Sources><NameOfThePackage> (which is MyAwesomeToolbox in my example), if it is not already located there.

Alternatively, you can also just drag and drop existing .swift-files from other projects to Sources>NameOfThePackage.

So, for this example, I chose to add a new file called Logger.swift. The content of this file is as follows:

It is crucial to define the package class and all properties and methods that are supposed to be used directly from within any project as public. They won't be accessible if they are not.

Don't forget to commit the changes by choosing Source Control > Commit… at this point.

Connect The Package With A Git Remote

SPM relies on Git. So the package needs a remote repository where changes can be uploaded to and where the project can be added from in other projects.

A prerequisite to do so is connecting your Xcode installation with a Git server, be it Github, Gitlab or any self hosted solution. Adding the account is done from within the Settings of Xcode under the tab Accounts. Just click on the little + on the lower left and connect with the Git server of your choice.

Now, we need to add a remote (which has to be a git url):

When concluding this procedure, Xcode will make the first push to the remote.

Even though it might be obvious, it took me some time to figure this one out: the version of the SPM package follows the git version. This can be important if in the projects you want to use it, you are going to use the version options when importing the dependency (see below).

The Toolbox Package In Your Personal Project

Now, that we have created and uploaded our new shiny toolbox package, we can use it in any of our projects.

To demonstrate this, I first create a new project. Then, in the project

That's it – Xcode links everything together and builds in the background after which the package is ready to get used in the project. This procedure results in the following project structure: 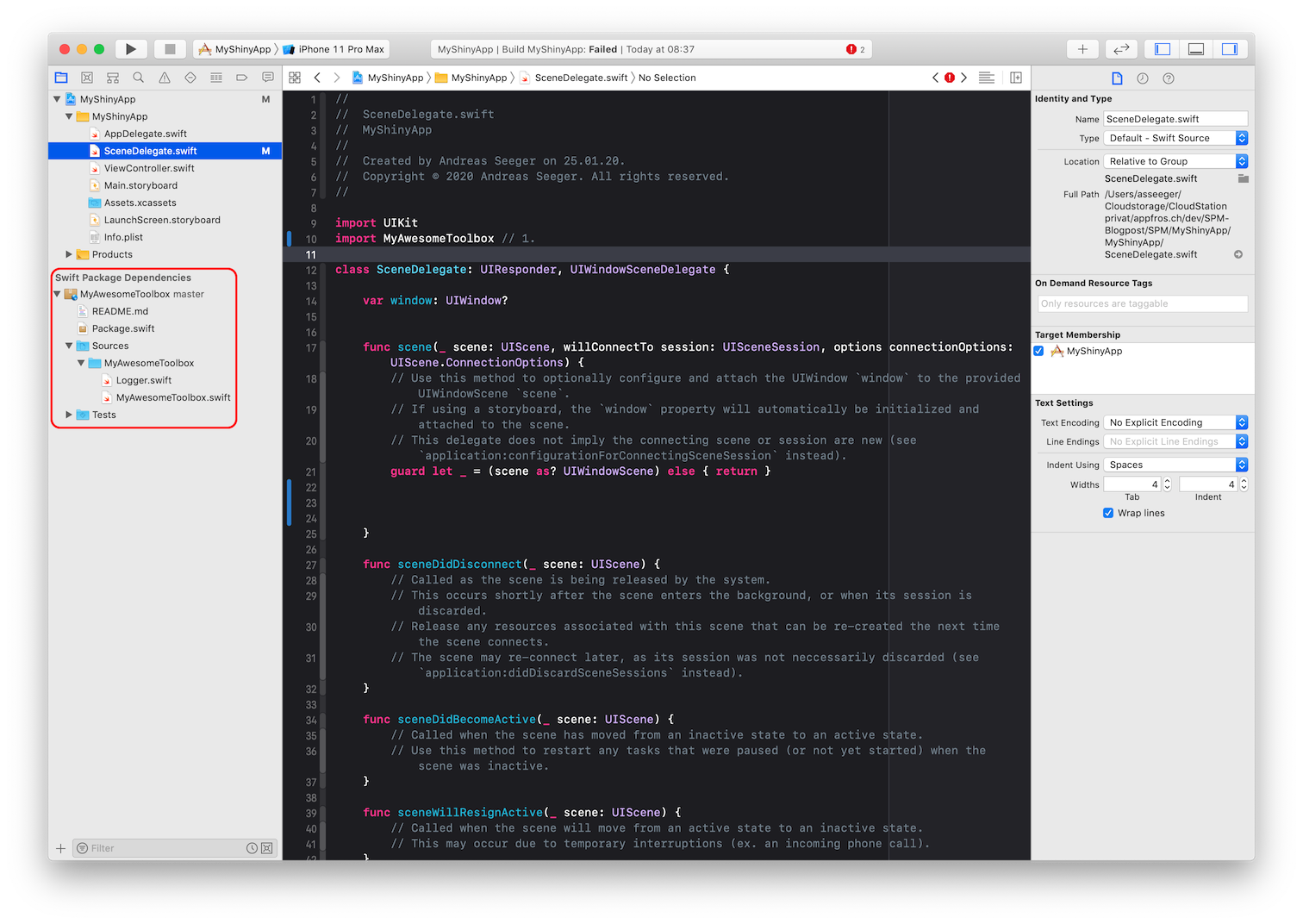 You might get an error or two in your project at this stage – don't worry, we will handle this in the very next section!

Be aware that you will have read access only to all source files of your package – so you won't be able to write to it. It actually makes sense, when you think about it, because it is an external source after all. Should you need to make changes, you will have to do that in the package project itself – or use a little, neat trick, that I will show you further down in the section Developing The Toolbox And The Project Side By Side.

In the Add Package Dependency… dialogue, you can also add any third-party package using its known public git url.

Using the package from within the project

For the sake of simplicity, I will now just add a log entry in SceneDelegate when the application session starts. To do so, I will have to

Sounds pretty straight forward, doesn't it? Well, in this concrete example we do have an issue: the os_log framework I am using in my Logger class is available only from iOS 10 or newer. But wait a second, my project has an iOS Deployment Target of iOS 13.2 set automatically when it got created – so what's going on here?

Well, turns out that the package itself needs to have informations on the target OS as well, whether it be macOS or iOS. This information needs to be placed in the package manifest, the Package.swift file under the platforms section. So, head over to the package's project and add this information. After doing so, the manifest should look like this:

Make sure to commit to git and push to your remote after this step with Source Control>Commit…. 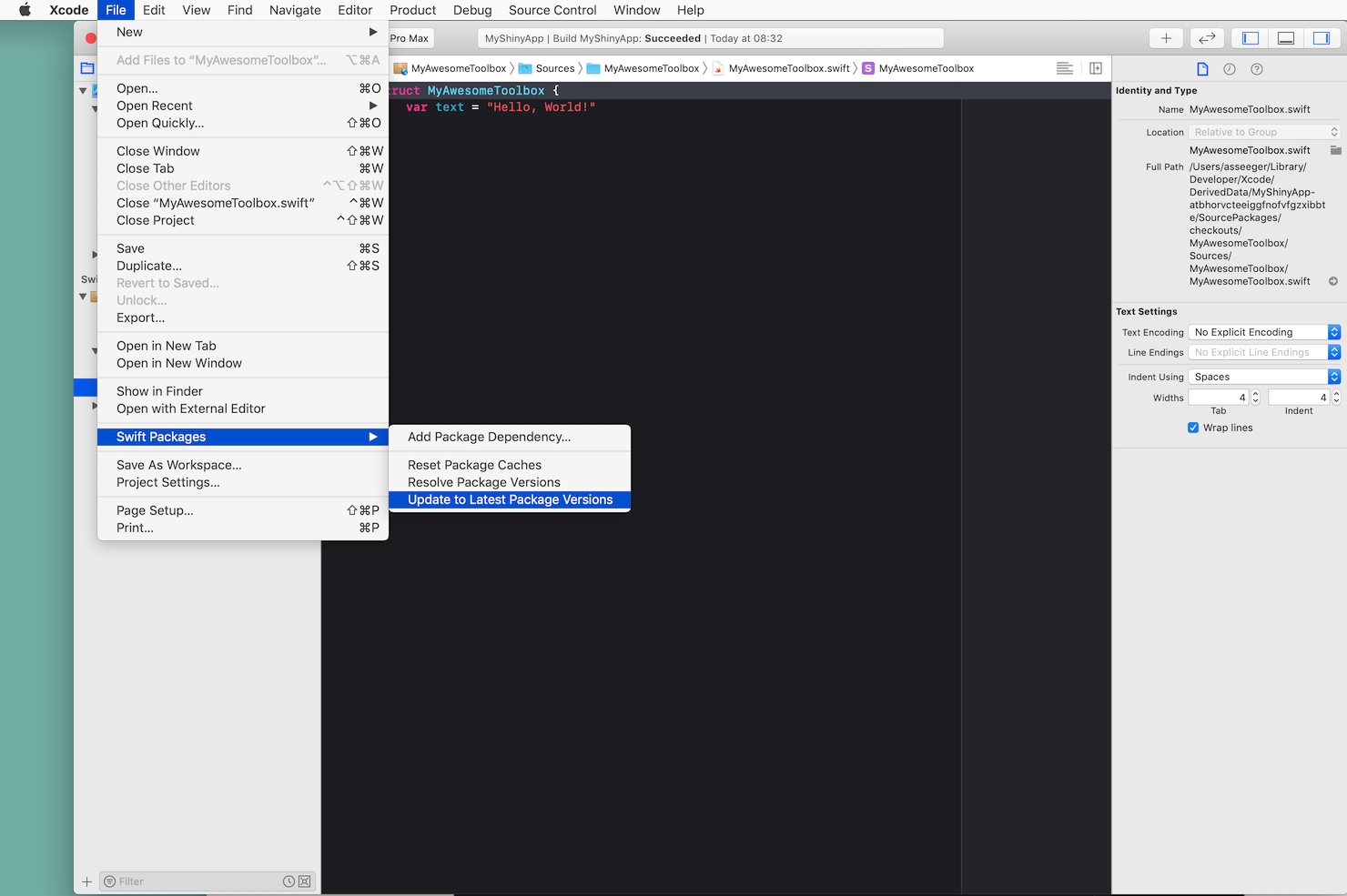 This change now has to be reflected in the project using the package. To update the resource from within your project, select File>Swift Packages>Update to Latest Package Versions.

When you now open the Package.swift from within the project, you should see the changes we just did to this file.

Grav was with by Trilby Media.